, Dec. 12, 2016 /PRNewswire/ --  (MOV) – On , hosted the Turn 2 Foundation's "Jeter's Leaders" to an extraordinary evening where the high school students experienced the 2016 Tony Award-winning musical The Color Purple. The Leaders also attended an exclusive pre-performance reception at where members of the cast and crew provided first-hand accounts of the details and complexities that go into the making of a major production. Tony Award winner, Cynthia Erivo, who stars as Celie, and , the show's Musical Director and Conductor, along with the Associate General Manager , shared their passions for live performance and the stage. 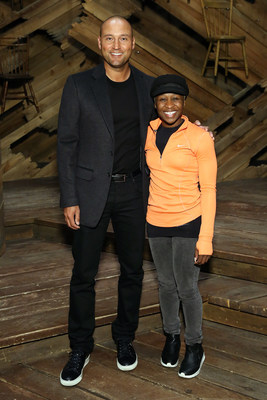 "Arts and culture provide our Jeter's Leaders with such a rich, relevant and integral connection to the academic goals fostered by the Turn 2 Foundation," said . "I thank for providing our students with special opportunities like this to explore, experience and engage in innovative programs and initiatives that help promote personal growth and development."

The Turn 2 Foundation was established by in 1996 and is managed by his sister who serves as the organization's President. Turn 2 promotes leadership development, academic achievement, healthy lifestyles, positive behavior and social change activism.  The Jeter's Leaders program is an intensive, four-year leadership development initiative for high school students who are role models in their communities. Jeter's Leaders is the signature program of the Turn 2 Foundation, which this year celebrated its 20th anniversary.  (For more information, please visit www.turn2foundation.org).

"We are thrilled to be a part of this wonderful partnership with Turn 2 Foundation for the seventh consecutive year," said , Chief Marketing Officer, "It gives great pleasure to provide these students with experiences that enrich their education through the innovation and creativity that abounds in the cultural arts."

A brand long identified with Modernism and closely associated with the performing arts, has achieved a proud 135-year history of design excellence and innovation. has been a major supporter of , , Jazz at Lincoln Center, and . Additionally, has supported the , , , Ballet Pacifica, and the Cooper Hewitt, .

To view the original version on PR Newswire, visit:http://www.prnewswire.com/news-releases/movado-hosts-a-special-night-on-broadway-with-derek-jeters-turn-2-foundation-300376568.html